A U.S. Air Force pilot attached an engagement ring to a weather balloon and sent it 17 miles into space as part of a spectacular surprise marriage proposal that included a wild hunt to retrieve the precious payload after it plummeted back to earth. 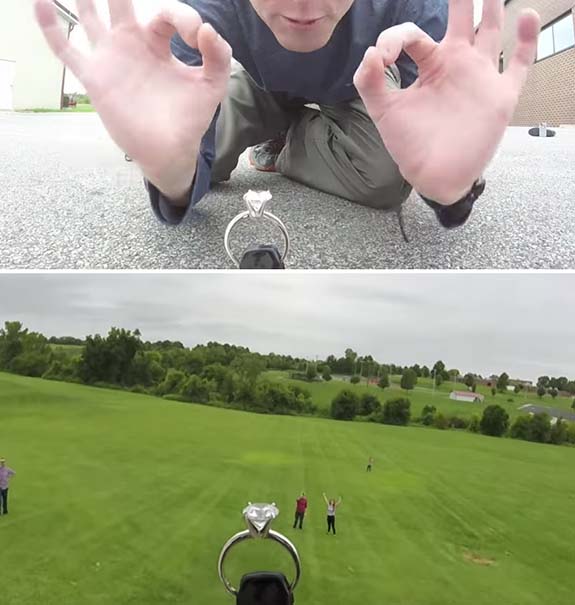 Stuart Shippee, a B-2 Spirit Stealth Bomber pilot from the 393rd Bomb Squadron at Whiteman Air Force Base in Missouri, worked with a bunch of friends and now-fiancée Marie Lisman to launch the balloon to a critical altitude of 90,000 feet. With the onboard video camera capturing every moment of the journey, the viewer is treated to spectacular images of the ring traveling three times as high as the cruising altitude of a 747. (Shippee used a faux ring just in case the mission went awry.)

Lisman didn’t know an engagement ring was making the journey. She was under the impression that a medallion commemorating the 13th Bomb Squadron of the United States Air Force was secured in the clip. At the very last moment before launch, and out of Lisman’s view, ShIppee replaced the medallion with the ring.

In Shippee’s video, we see the team’s preparation of the balloon, the clever switching of the medallion for the ring, and then a thrilling ascent that starts over a grassy field and ends at the edge of space, where the atmospheric pressure causes the balloon to burst and spin back down to earth. 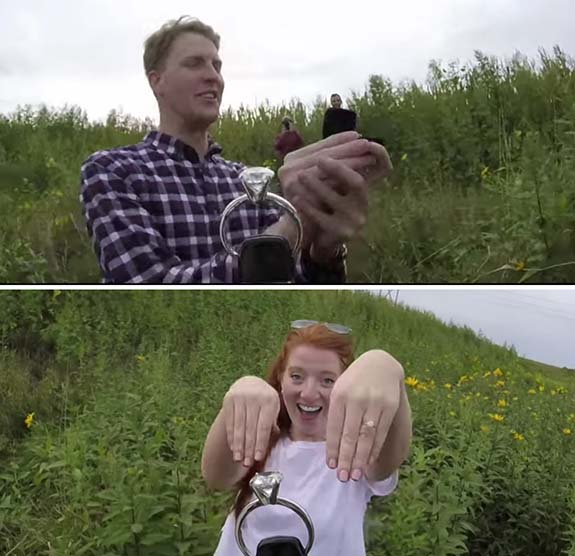 Using a GPS tracking device, the team was able to find the remains of the balloon, as well as the camera and ring in a cornfield. We see Lisman grabbing the camera, but not realizing right away that the medallion has been replaced with an engagement ring.

In the next moment, Shippee is on bended knee, ring box in hand. With the the real diamond ring, he proposes to his startled girlfriend. In the final scene, an ecstatic Lisman shows off her ring to the onboard camera.

“When I first picked up the balloon payload I did not see the imitation ring until I looked down and Stuart was on his knee,” said Lisman. “I was speechless! After the long day and difficult search for the payload I was very happy to have the ending be so special.”

Shippee told the Whiteman Air Force Base website that sending a ring into space was on his mind for a while, but he wasn’t sure if he could pull it off. His window of opportunity was limited because Lisman was in town only for the weekend.

“If anything went wrong, the whole thing would fail,” he said.

In the end, the mission — which took place in August — was a rousing success. The video was finally posted at the end of December and has been getting viral traction just recently.

You can check out the full video below…